At first it was because the music would cheat my brain and my brain would pay more attention to Tracy Chapman’s golden voice than it would to my heavy panting. However, with time the panting decreased because my body was getting used to it all, I was becoming fit 🙂 . So I would go some days without having to cheat my brain with loud music but rarely.Then I lost my earphones…

Losing my earphones meant going around to borrow someone’s before my run and sometimes I would just run without them to skip the hustle. I trained my brain to focus on the voice of my dreams and visions and the swishing of cars and the tired voices of workers going home from a day’s work. Running on the football field became my sanctuary, until unpleasant voices a lot like my initial panting started…

You are beautiful! Run! Run!

Initially I just ran away faster and faster and fast, farther away to the other  end, away from the fence. On the one day I turned to see those faces so that I could see how these people with the guts to disturb my peace looked like, I saw them waving excitedly. I think one asked for my number. I turned away immediately and continued to run. Away. All the while I remembered the’ responses that I had gotten after bringing up catcalling .

“Aii stop fussing it really isn’t that big of deal.”

“We are men and we are your friends but do we catcall you? You must stop generalising…”

” What do you think was the reason they were responding to you like that? Every action has an equal and opposite reaction.”

” You are the one who chooses to pay attention to the voices, just run.”

“Isn’t it your fellow women who ask for the attention?”

“Don’t you enjoy those comments in a different scenario?”

So I ran away. Then this one day I looked and the guy was waving so frantically that I feigned a smile and I  immediately hated myself for it. Why was I smiling like I enjoyed a stranger calling me pet names and treating my body like that lean piece of meat that you want cut out for you at a butchery? ” Nikatie hiyo enye iko na mafuta kidogo, hapana hiyo ingine!”

So I started making sure I find earphones and drown all the voices with blasting music, empowering music, music that made me forget, music that made me oblivious. But soon  the voices became louder, cruder, more explicit and what was even worse, this time round there was no fence. So I couldn’t run faster and faster and fast, farther away, away from the fence. I also could not ignore the voices because this time the insults that had always followed my lack of response morphed into actions. The insults morphed into an unwanted touch here and there and “not there, please!” then to stripping: “that running vest shows to much flesh babe let us help you show more, lovie” then to  raping:”Oh sweetie, what is the need of leaving lean meat in the butchery anyway? lean meat=eat”.I couldn’t run away anymore, they were faster and more powerful and mostly more justified. I was not supposed to be there in the first place especially in such fitness clothes. So I lay there splayed maybe with AIDS maybe pregnant maybe with an STD maybe with none but still violated. Later my society would shame me and ask me questions about what I was doing…

Brain stop with the fabrications! “Chebet you mustn’t let your mind envision such things while you are running,this is the time to think of your 20-year plan not what would happen if there was no fence!Plus you are exaggerating things!” But my mind wasn’t exaggerating anything. My mind was replaying other people’s stories, true stories. Besides, wasn’t this the reason daddy doesn’t allow me out alone or on foot? Wasn’t this the reason that that day at Kahawa we couldn’t tell the touts anything after they doubled the fare? And nothing at all when they all came at us pulling us in directions towards their own matatus? Holding us wherever they pleased? Isn’t this the reason, or at least the second one after insecurity, that women must not be out roaming late at night? Because: “what are you doing outside the fence?” “Why didn’t you run faster and faster and fast?” “Surely you know better than to run with such a figure.”

Today evening the same thing happened. The guys were catcalling again. It wasn’t my brain, the voices were actually louder than my music… They were three or so, I didnt dare turn, I just looked from the corner of my eye. The guy called and shouted, ” Lovie! Lovie! Babe*foreign language words I did not understand* Babe! Sissy!” I am ashamed to say this but I ran, faster and faster and fast, farther away, to the other side, away from that porous non-soundproof fence. As I showered I thought of reporting this to the administration, trivial as others made it seem, so that they would put up a huge poster. ” Catcalling is harrasment! Don’t do it here( or anywhere) or you will get arrested!”

I also wondered about all the responses I had gotten, the ones that keep me running away. Why did these people think catcalling ordinary or justified yet when I ran with a man the voices diminished? What life is this! I want to speak out, I want to tell them that it isn’t okay for them to shout names across the fence. It is not okay because I am uncomfortable, because I feel objectified and my feelings matter. I want to tell them if I really wanted validation/ compliments/ whatever they think it is I would ask for it. I would open my mouth and shout across the fence, ” Hey handsome, what do you think of my thighs today? They are really toning!” because I have a voice.  I would ask the same way I do those from whom I want responses. I would also ask them for their permission before complimenting their good features as well, okay that’s a lie, I would only compliment a man I know. Above all, I want to tell myself to stop thinking I am being trivial or fussy whenever I think of speaking out.

Anyway, maybe next time I will stop running look at them and speak out. Like Ujunwa must have wanted to in the excerpts from ‘The Thing around your Neck” below. 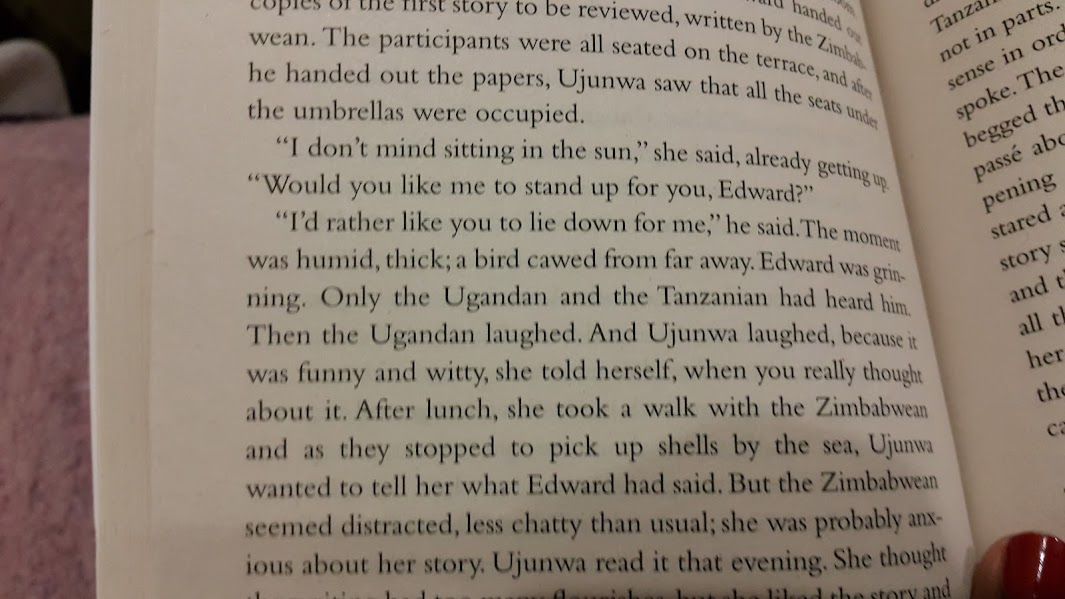 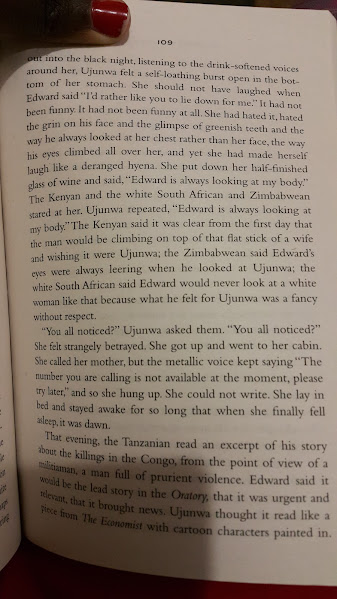 I love Kansiime, maybe her response is also an option-hehe! https://www.youtube.com/watch?v=XqOdDzqBkns

4 replies to Why I run with ear phones…